What would the May 24th long weekend be without the traditional running of the 10 Mile Road Race. This premier running event is steeped in history that dates back to the inaugural running in 1910.

In April of that year, the Fort William Daily Times-Journal announced that it would sponsor an annual road race with the purpose of promoting "healthy and clean sport at the head of the lakes". The race would follow a course of 10 miles and 52 yards through the streets of Fort William and Port Arthur, Ontario.

On race day the streets were lined with spectators along the entire route. They were not disappointed. The inaugural race was won by J.E. Edwards of Port Arthur in a time of 57 minutes flat, out-distancing the second place finisher by over three minutes.

The Times-Journal went on to provide sponsorship for the race until 1915 when World War I forced the cancellation of the event. It was reinstated in 1920 with E.A. Lawrence from Montreal winning it in a time of 56:49. Interest in the race increased steadily. During the 1920's the race attracted the top runners from Northwestern Ontario. Two local runners, Tom McAuliffe of Port Arthur and Arthur Widnall of Fort William made names for themselves with their involvement in the race (McAuliffe won the race in 1923, 1924, 1926 and 1929; Widnall placed second three times and third once).

During the 1930's, with people feeling the impact of the Great Depression, morale was low. The only commodity which seemed to be in excess was time. This is most likely the main contributing factor to the Ten Mile Road Race's success during this period.


The race continually drew a great deal of public interest and the number of entrants was consistently higher than in previous years (an average of 30 runners in 1930's vs. an average of 12 runners in the 1920's). During the 1930's, Finnish athletes dominated the top three positions consistently.

The success of the race came to an abrupt halt in 1939 with the advent of World War II. The 1939 race would also be the last time the Times-Journal would sponsor the event. The future of the race was uncertain and it is understandable that the concern about the race was not a high priority at the time. The race was cancelled indefinitely.

In 1949 during a club meeting of the Royal Canadian Legion Branch 6, a group of war veterans discussed the history of the race and decided to revive the ten mile event. On Victoria Day 1949, one decade after the last race, the Ten Mile Road race was once again held. A mere seven runners toed the line in that race, the lowest turnout ever. Don Jones of Winnipeg won the event in a time of 60:55, the slowest running of the event in its history. Public enthusiasm and interest was low as well. The Legion did not give up and sponsored the event three more years. 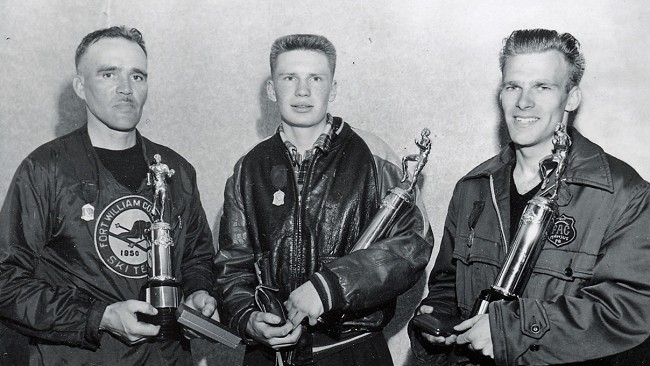 1950 Trophy Winners Bob Bryce [1st, in the centre], Ray Oja [2nd, on the right], and Toivo Lehtinen [3rd, on the left]
[photo courtesy of the Northwestern Ontario Sports Hall Of Fame & Museum]


Lorne Allard of Port Arthur won the event in 1951. Low registration and public apathy forced the organizers to discontinue the race after the 1952 event. It was thought that interest had switched from running to sitting as the television hit the market.

Interest in distance running recovered in the early 1960's and Branch 6 decided to reinstate the Ten Mile Road Race one more time. Thirty-three runners entered. Arjan Gelling of Port Arthur won the event that contained a field of mainly high school runners. The trend throughout the 60's was for young runners to lead the way. Gelling went on to win the race in 1965, 1966 and 1967. He set a new course record in 1967 (52:06). This excellent time and an increased number of competitors assisted the regeneration of public interest in the race. Since 1963 the number of runners has steadily increased (over 400 registered in 1993).

In 1968 the first female competitor ran in the Ten Mile Road Race. Frances Blanche of Marathon, Ontario entered the race and finished with a time of 72:56 beating several male competitors. However, there was no recognition for Frances. Awards and separate categories for female runners were not initiated until the late 1970's. The fastest time to date for a local female athlete is Sue Kainulainen (58:30 in 1984). Sue went on to win the women's division nine times.

In 1970, the event took on a higher profile as it became the National 10 Mile Championship. Many of the country's top runners traveled to Thunder Bay and provided some of the fastest and most competitive racing the event has ever seen. The field was so strong that for the first time no local area runner would finish in the top three positions.  In 1975, Pekka Paivarinta from Finland, a competitor who ran his best in cooler temperatures, set a men's race record that has endured to the present day.  Paivarinta competed in the 1972 and 1976 Olympics, set a world record in the 25K and won the inaugural world cross-country championships in 1975.

A torrential downpour in 1971, which left the Port Arthur and Fort William under water, forced organizers to reschedule the race for June 15.  A shift in the nature of the race, from a highly competitive elite event to one encompassing runners of all abilities, took place with the onset of the running boom of the late 1970's. Up until this time, the field of participants had never been greater than about 80. Into the 1980's, participation increased to the point where close to 300 runners were ready to challenge the 10 mile distance.

The race continued to flourish during the 70's and 80's under the sponsorship of the Royal Canadian Legion. Increased financial burdens and a declining budget forced the legion to withdraw as a major sponsor. In 1989 Lakehead University picked up the gauntlet and sponsored the race with the help of the Legion and other supporters. They continued their sponsorship for the next five years. Bell Canada came on board in 1992 and 1993. The torch was then passed to Shoppers Drug Mart who contributed financial and volunteer support for the next 10 years. In 2004, the 71st. running of the 10 Mile Road Race welcomed the Thunder Bay Professional Firefighters Association as the next title sponsor. Half-Way Motors joined in as presenting sponsor in 2009.

There have been two notable additions to the event. The first was the introduction of the Spaghetti Dinner in 1991. The host venue is packed with hungry runners on the Sunday evening as they do their final "carbo load" before the big race. To encourage the youth to experience this great race, a school relay event was added. Teams of high school and elementary school runners cover the distance in two mile intervals with all teams being recognized at the awards social.

One of the most significant sporting events in all of Northwestern Ontario continues to be "the" running event of the year. Runners from all parts of Canada, the midwestern United States and throughout this area, converge on Thunder Bay for this Victoria Day celebration. From humble beginnings in 1910, the 10 Mile Road Race has grown to become a very special event for all who are part of this great tradition.

BE SURE TO VISIT THE NORTHWESTERN ONTARIO SPORTS HALL OF FAME

The Hall previously featured an exhibit that celebrates the Ten Mile Road Race, including the original trophies awarded to 1st and 3rd place finishers in the inaugural 1910 race. 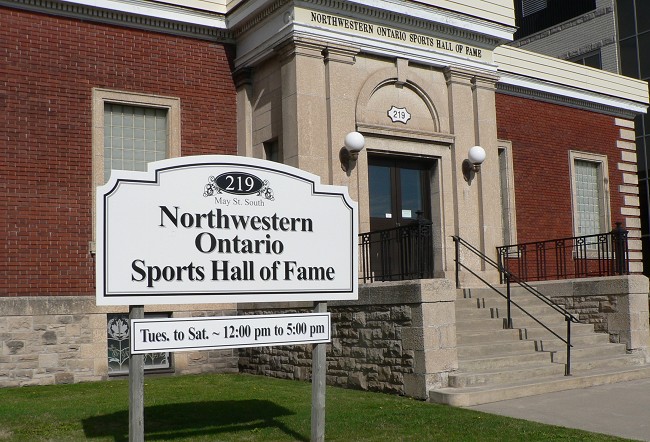 The Sports Hall Of Fame is open to the public Tuesday through Saturday from noon to 5PM, and
is located at 219 May Street South in Thunder Bay. 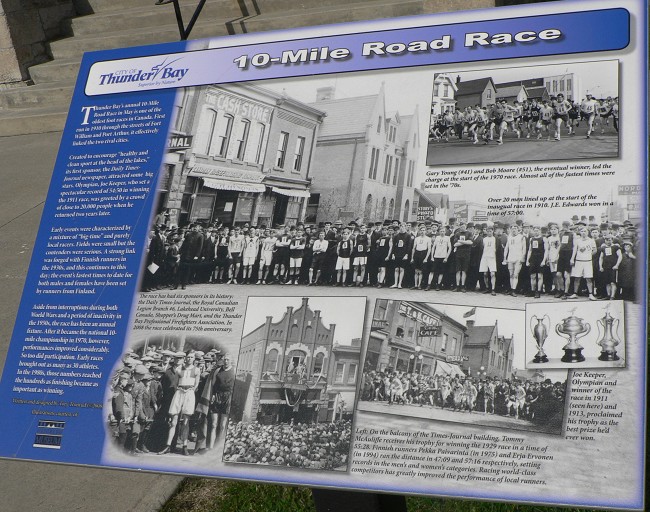 The Ten Mile Road Race Story Board at the Northwest Ontario Sports Hall Of Fame.